It’s true. Artists can and will take their creativity anywhere and everywhere. They don’t need fancy art materials or a large studio space (although those things are nice to have!) Today’s art inspiration shout-out goes to this guy. 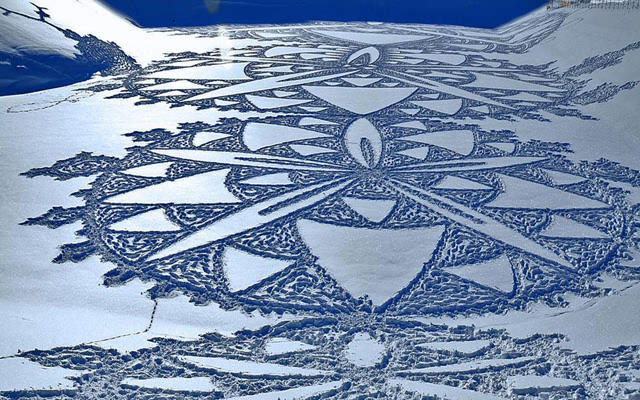 Simon Beck creates massive geometric designs in the snow by walking in snowshoes. Before beginning his journey, he plans and maps out his designs, and he finds flat terrain to be most suitable for his creations. He discusses more about his process here.

On the other hand, I have been using my living room table as a creative space for the past few days. To be honest, my studio space is not designated to one area of the house. It just depends on where I feel like setting up, or more accurately, the space where the creativity deems most suitable…

My most recent artwork was inspired by a few things:

1. The acronym for my school is PIES (Padonia International Elementary School). Our school is one of the most diverse in the state of Maryland, where if ethnicities were shown on a pie chart, they would be nearly even parts. I want to visually represent the diversity in an appealing way.

2. I am participating in an upcoming exhibit with a food theme.

The whole concept of ethnicity got me thinking about my own. On many occasions I have been asked questions such as, “Where are you from?” or “What are you?”, implying that I am racially ambiguous. I do not take offense to these questions, rather, I see them as genuine curiosity. To visually depict my background, I created this:

The pie is split into sections, which represent the fraction of each culture. For example, I am half Filipino (mom’s side), so that section is half of the pie. I also researched various pies from around the world, and used them to illustrate each country. The pie representing my Filipino background is a Buko pie, made with young coconut. I have never had Buko pie, and now I want to try it! The other sections represent my dad’s side: Irish (Sheppard’s pie), German (black forest pie), and English (apple pie… not truly American!).

I plan to expand the pie idea into a series entitled, Heritage Pies. This should be a fun project!